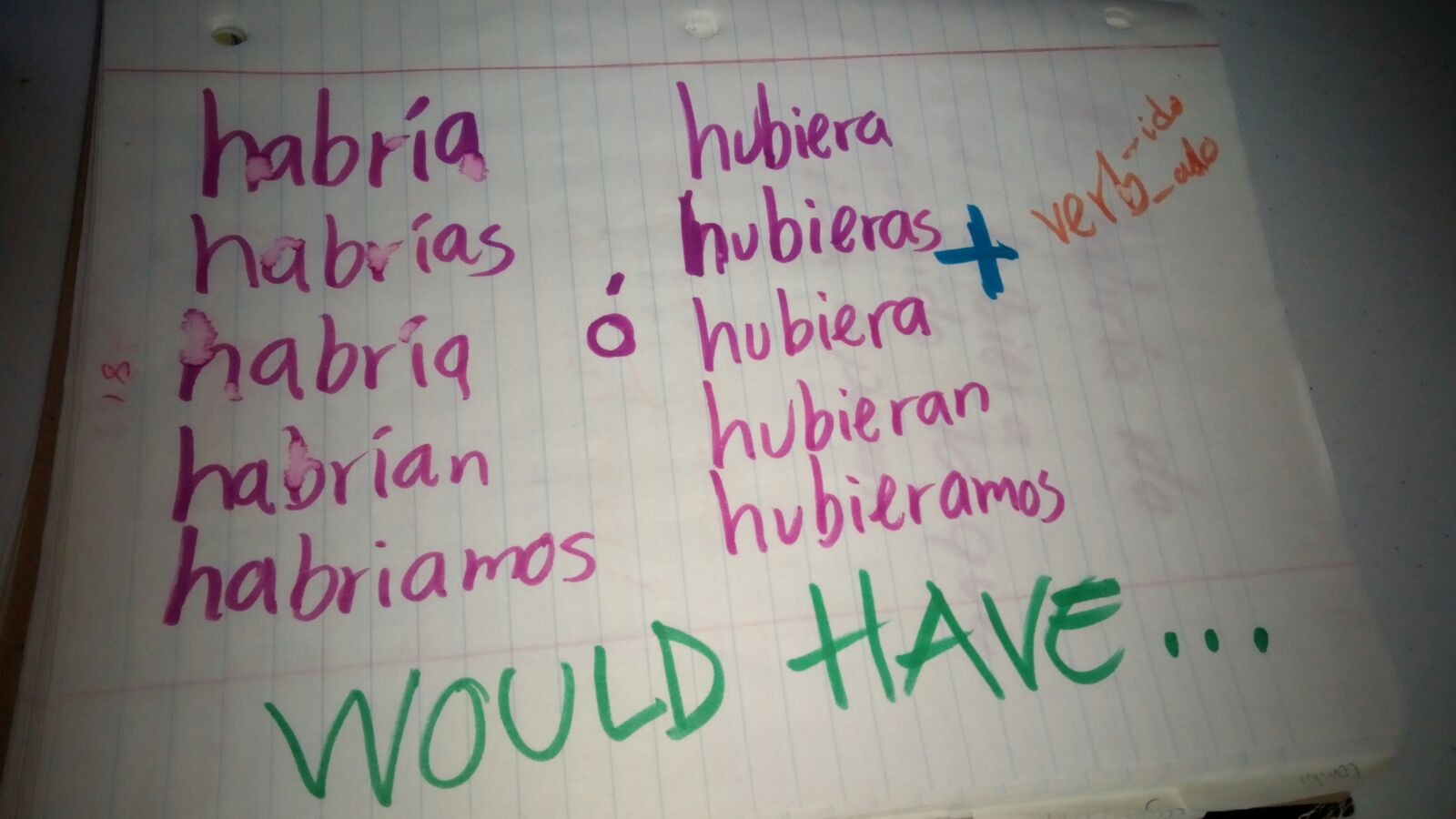 My previous two post covered how to say could have and should have in Spanish.  Here are the links for those posts:

How to say Should Have in Spanish

How to say Could Have in Spanish

Today we’ll finish off this series by looking at how to say Would Have in Spanish.

HOW TO SAY WOULD HAVE IN SPANISH

To say would have in Spanish, you need the verb haber.  Haber is an auxilary or helping verb, but don’t worry about that for now.  All you need to do for the moment is learn the patterns I’m going to give you.  Eventually you’ll have to know how to conjugate the verb haber in the conditional perfect tense, but today I’m going to do that for you, just like in the previous posts.

You also need to be able to form past participles.  If you read my other posts, you’ve already seen how to do that.  But for those of you who missed those posts, creating a past participle is easy.  All that means is you need the “-ido” or “-ado” version of the verb.  With the exception of a few irregular verbs, “-ido” and “-ado” are the only things you need to form the past participle of a verb.  Here’s a very nice page that’s explains how to do that in plain English.

Just like before, I’m going to give you the basic pattern:

Let’s go ahead and expand this pattern to include all the conjugations of haber in the conditional perfect tense.

If you read my previous posts on how to say could have and should have in Spanish, you already know we’re going to work with the same examples as before.

Habría dormido más tiempo
I would have slept longer

Habrían llamado
They would have called

This is the part where I mention a few other resources where you can find help.  If you read the other posts you’ve already seen these.  If not, read on.  I think you’ll find these suggestions to be quite useful.

Most likely you’re going to need a little more help and practice to truly master how to say would have in Spanish.  One great source of practice is the book Spanish Verb Tenses.

Chapter 23 offers a great explanation of the conditional perfect tense and plenty of exercises for you to sharpen your skills with.

Click here or on the image to take a look at the book on Amazon.  You can get a peek inside the book as well.  I actually own this book and it’s really helpful for learning how to conjugate any verb  tense, not just the conditional perfect.

Another one is Learning Spanish Like Crazy Level 3.  Among other things it devotes two full 30 minutes lessons to saying would have in Spanish.  You can click here to check it out. It actually covers a lot of useful material I really haven’t found anywhere else.

¡Hasta la próxima!
Until next time!