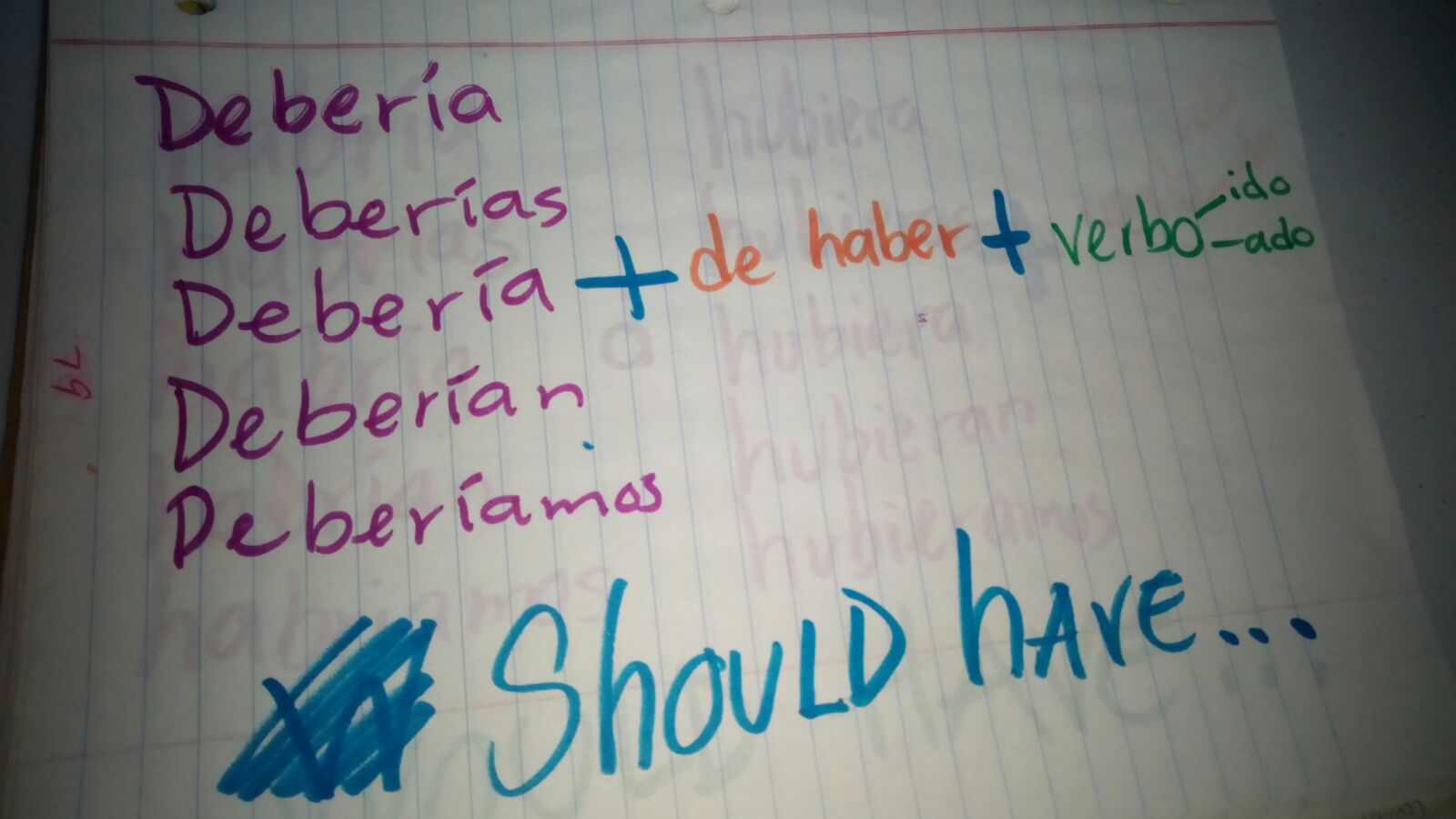 Today we’re going to talk about how to say should have in Spanish.

There are two ways to say should have in Spanish, but you’ve probably only been taught one, and both ways use the verb deber.

The first way to say “should have” in Spanish is by using deber in the conditional tense:

The second way you to say “should have” in Spanish is by using deber in the simple past tense:

Let’s look at how to use them.

Let’s take a closer look at this.

We have the verb deber which will have to be conjugated  in the conditional tense.  If you need help conjugating the verb deber here’s a fantastic conjugation chart you can use.

After that follows the helping verb haber.  It doesn’t need to be conjugated, you just use it as is.

Now let’s look at some examples.

Debería haber dormido más tiempo
I should have slept longer

Deberían haber llamado
They should have called

In this case we need to conjugate deber to the simple past tense and the but pattern is identical to the one above.

Let’s look at this in action.   And if you need help with the conjugations, you can use the same conjugation chart I referenced above.

No lo debí haber hecho
I shouldn’t have done it

Debí haberme ido
I should have left

Esto no debió haber pasado
That shouldn’t have happened

Hoy se debieron haber graduado
They should have graduated today

And there you have it, the second way to say “should have” in Spanish.

What are the differences between them?

Using deber in the conditional tense is likely what you were taught in school or by a grammar book.

It’s commonly used in spoken Spanish, although it’s inappropriate for formal writing.    Which is odd, because it appears in every grammar book I’ve ever seen.

My Colombian maestra (at the time) also informed me that it’s more of an anglicism that has crept it’s way into Spanish.    Given that this form is considered inappropriate for formal writing, she’s probably right.

This is also supposed to be the kinder, gentler way to tell someone what they should have done.

Saying “should have”  in Spanish using the simple past tense is what you should be using for formal writing.

I hear native Spanish speakers use this structure a lot, possibly even more than using the conditional tense.  But that could be a regional thing.

The other thing you need to know is that this structure could be considered very direct and potentially make someone feel like they’re being chastised.   But like most things, I imagine how you say it makes a big difference, so I wouldn’t worry about that too much.

And that’s it, two ways to say should have in Spanish.

So which one should you use?

That’s totally up to you.  Despite what may be very minor nuances between the two, they’re both valid ways to express the idea of “should have”.   I’ll leave you with the same advice I give my Spanish students.  Use the one that’s easiest for you to pronounce and remember.

If you have any questions, post them in the comments below.

Leave a Reply to Helping You Learn Spanish Cancel reply