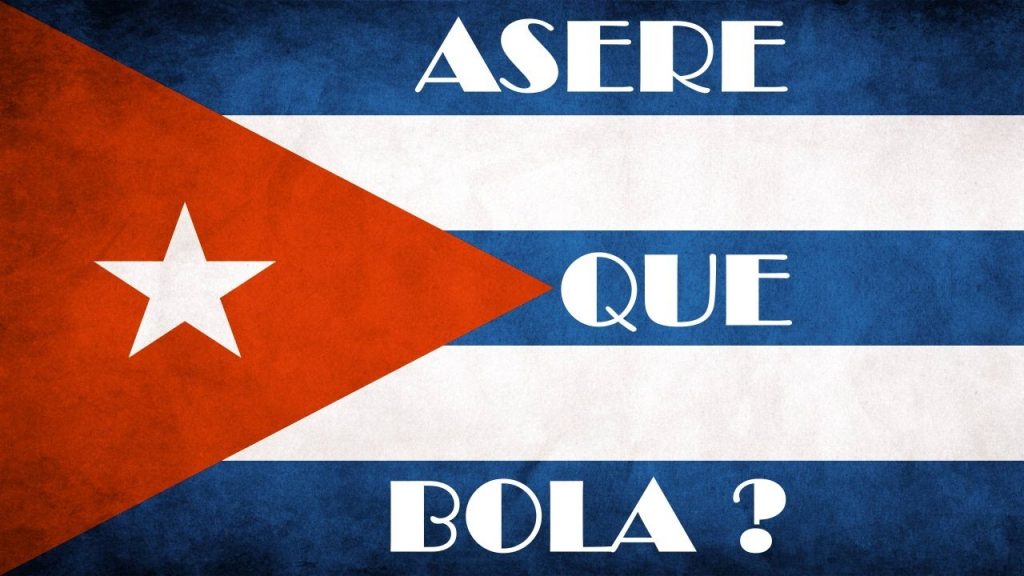 Cuba is a beautiful island with a lot of unique cultural aspects, and it’s Spanish is no different.  I took a short vacation to La Habana, and today I’m going to share some of the Cuban Spanish I learned while I was there.

I doubt you’ll find many expressions more Cuban than this one:

So what exactly does it mean?

Aseré qué bolá is the way to say “what’s up dude?” in Cuban Spanish, and it’s used as a very informal saludo (greeting) that’s used between friends.

Qué bolá means “what’s up?” and aseré means bro, dude, or friend. As for when and with whom to use it, apply the same judgement as you would the English equivalents, “hey bro”, “what’s up” or “what’s up bro” and you should be fine.

Bolá is sometimes written as volá. The reason why is because the sound of the b and v is sometimes identical so speakers aren’t always entirely clear on the spelling.

And you can use “Qué bolá” and “aseré” independently of each other.

Lastly, this Cuban expression is so popular that someone decided to write song after it. Check out the video if you want to learn how to pronounce the term like a true cubano.

If you want to impress or amuse your Cuban friends with a genuine Cuban Spanish phrase, this is a really cool one to do it with.

Ok, let’s talk about some of the other terms I heard, like peletería. In general a peletería is a place that sells leather goods. In Cuba a peletería is a shoe store, which you likely know as a zapatería in standard Spanish.

Next we get to the word guagua that Cubans use for bus and in fact it’s used throughout the Caribbean with that meaning, but in other countries can mean something totally different.

In fact, I wrote about this word many years ago on my sister blog, My Spanish Notes, where I also go into detail about the various words for bus in the Spanish speaking world:

I also published a free collection of 30+ essential phrases for taking a bus.

This list will teach you the Spanish you need to confidently get where you’re going on a bus.

But enough about buses, let’s talk about what a paladar is.

A paladar is a privately owned family restaurant. And that’s a big deal in Cuba, because the Cuban the government owns virtually everything.

While eating in a paladar I picked up another word, jaba or jabita.

I asked to get my food to go, and as expected they boxed it up nicely and put in a bag. When I looked at my bill, I was curious about the extra charges. The mesera (waitress) informed me it was for la jaba. Of course I had to ask her “¿Qué es una jaba?“.

She explained to me that a jaba is a bag. It can be a simple a grocery store style plastic bag or any type of bag used to carry things around. And don’t be shocked if you see it spelled as java or javita.

I mentioned the Cuban government owns nearly everything. Well, there’s another very popular business that Cubans are allowed to own, a casa particular.

The term casa particular literally translates to “house particular”, but that’s not a very helpful translation. A casa particular is an apartment, house, or room in a house that the property owner rents. Think of it as Cuba’s Airbnb.

Casas particulares are extremely popular with tourists because hotel prices in general are very expensive, upwards of $150 a night. As a result, the vast majority of tourists opt to stay in a casa particular as they are much more affordable, anywhere from $15 and up.

And that’s it for now. My visit to Cuba was brief so I didn’t get to learn as much as I’d like about the Spanish spoken there, but what I did learn are definitely terms every visitor to the island should know.

My next post will be about how taxi’s work in Cuba and the famous classic cars.