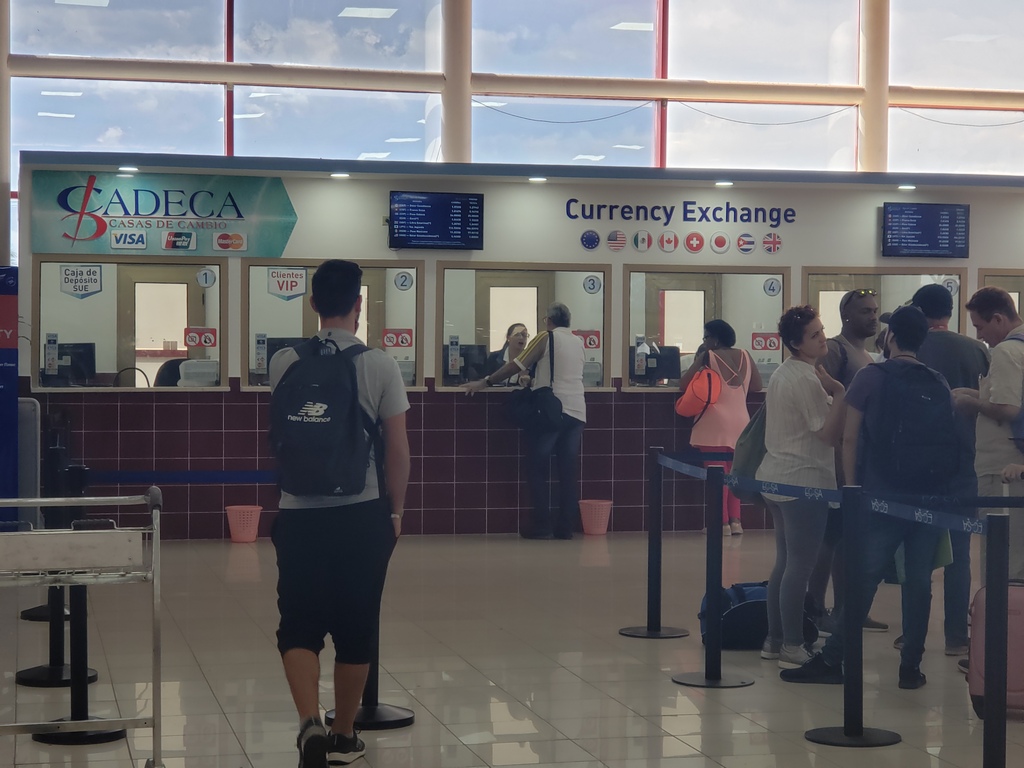 I took a short vacation in La Habana, Cuba, and I’m going to share the Cuban Spanish words I learned about the currency (moneda) used in Cuba.

In most other Spanish speaking countries the only term you really need to know is pesos, but money in Cuba is somewhat of a different animal.

When you get to Cuba, you’re going to need get your hands on some Cuban pesos, and like everywhere else in Latin America, you’ll need to change your money in a casa de cambio, a currency exchange.  Except in Cuba a casa de cambio is called a CADECA.

You can also exchange money in the larger hotels, although they don’t have signs posted.

You’ll see these signs all over La Habana.

By the way, if your Spanish isn’t quite up to par when it comes to currency exchanges, I’ve already written an article to help you with that:

Now let’s get back to those Cuban pesos.

When it comes to dinero (money) in Cuba, it’s not quite as simple as converting your dollars to pesos.   There are few things you’ll need to know.

The first one is that there are not one, but two monedas in Cuba.  By the way, monedas can also mean coins, but in this context it means currency.

The most important thing to know about these monedas is that they are not of equal financial value.

It’s not unheard of for local vendors or taxi drivers to try and short change tourists by convincing them CUC and CUP are of equal value when they give you change.

Distinguishing the two is pretty easy.

Ceucé (CUC) has pictures of monuments on them and are much more colorful.  And they say pesos convertibles (convertible pesos) right on the bill.

Ceucé is the moneda that tourists are expected to use, and it’s the only Cuban currency you can get at a CADECA.   One ceucé is worth about .87 centavos (cents) US.   You lose .13 centavos in the exchange because you have to pay a 13% conversion fee.

The ceupé has pictures of important historical figures and just isn’t as colorful as the ceucé.

By the way, paper money , or a bill as we would say is called a billete in Spanish.

You can’t get ceupé in a CADECA.   If you want to get your hands on some, you’ll have to go to a bank or pay for something in ceucé and get your change back in ceupé.

It’s not a bad idea to have some ceupé in your pockets if you plan on leaving the tourist area and buying in some of the local markets, small mom and pop restaurants, catching the bus, buying street food, etc.  But you don’t want a lot of it because you won’t be able to exchange it back and it’s worthless outside of Cuba.  Although they do make nice souvenirs.

Another term you might hear for money is divisa , which is used to refer to any type of foreign currency.

Informally, dollars (dólares) are sometimes referred to as chavitos or fulas.  And fulas is masculine, so it would be el or los fulas.

And that’s it.  Knowing these terms will make it a little easier to understand and use money in Cuba, and sounding a little bit more like a local doesn’t hurt either.